The Connoisseur of Alleys 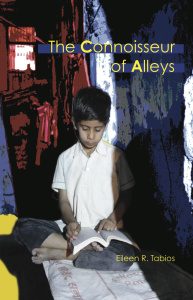 A phrase from Comte de Lautréamont’s prose poem Les Chants de Maldoror (1869) has been used by many as a definition of surrealism: “the chance meeting on a dissecting-table of a sewing-machine and an umbrella.” Such fanciful and bizarre juxtaposition is one of the many sources of beauty and the sublime in The Connoisseur of Alleys. Sentences and lines resurrected from the earlier works resonate and reverberate with each other in a preordained fashion so that each poem ebbs and flows, builds to a crescendo, echoing each of the other poems’ ebbs, flows, and crescendos. There is certainly “chance meeting” in the way Tabios’s text collides with itself but there is nothing chance about the delicacy and beauty that comes from those collisions.

These poems are, to borrow from Whitman again, “large and contain multitudes.” They are a striking tribute to art and to poetry—both Tabios’s own earlier work and, really, all poetry—underlining and emphasizing for ourselves our own humanity and grace. Again, a random quotation (page-riffled and finger-pointed):

I forgot the damp eyes were mine…. I forgot that if you call an island

“Isla Mujeres,” half of the population will be anguished…. I forgot

to be human is to be forgiven…. I forgot the taste of your mouth

was song of licorice….*

I forgot. And in forgetting, I remembered. Excruciatingly and exquisitely. May we all forget and remember so eloquently and elegantly.