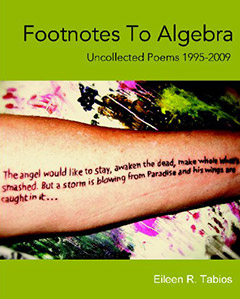 Every poem and every collection of an author can be seen as a Footnote to Algebra, gesturing toward the elusive algebraic equation that could somehow represent the totality of a poet’s oeuvre. However, Eileen R. Tabios has a more intricate explanation in her blog, The Blind Chatelaine’s Keys, on Aug. 14, 2009 as she discusses Footnotes to Algebra: Uncollected Poems 1995-2009 (Kenmore, NY: BlazeVOX Books, 2009):

To collect a bunch of uncollected poems is, in a manner of speaking, another test of whether a poet has, as a saying might say, done it right. Does a collection hold together under the random manner in which it was formed? I always suspected that if Poetry is inherently a matter of interconnections (what we Pinoys also call pakikiramdam and what I lately have been calling algebraic as a result of three months of tutoring a 13-year-old boy in four years worth of math), such a book can hold together—also recall Gertrude Stein’s observation (I paraphrase) about how a word arbitrarily placed next to another word will rub together for some unexpected frisson if not generate some meaning. Many poets have written under such an inspiration—it’s not that ambitious, I thought, to create a book on that basis, too.

What the poet does not tell us is that there are section-headings, and these signposts not only echo concerns in Tabios’ earlier work but create—as Charles Bernstein characterized his 2001 book, With Strings—a “modular structure,” in which “a string of interchanging parts” inform “the book as a whole”: “Political, social, ethical, and textual investigations intermingle, presenting a linguistic echo chamber in which themes, moods, and perceptions are permuted, modulated, reverberated, and further extended” (131). While the first section, “New Poems,” which I take to mean poems that have not appeared in magazines, is an arbitrary ordering device, the next two sections, “Triptych for Philip” [Lamantia] and “Chant for Kari” [Edwards], are elegies for poet-friends, and other parts involve postcolonial (or in Tabios’ formulation, transcolonial) thinking (“A Filipino Accent”), poetry involving wine (“Wine Country Honeymoon”), poetry taking its beginning intention from visual art (“Ekphrasis”), and a lyrical series inspired by the work of Jose Garcia Villa (“Girl, Singing”). Yes, “poetry” may be “inherently a matter of interconnections,” but the principle of “a word arbitrarily place next to another” is not going to guarantee the collection of generative interconnections; the poet needs to have written the poems carefully and then to have thought vigorously enough to establish effective groupings. And she did.

My own particular interests in Footnotes lie in the sections, “A Filipino Accent” and “Ekphrasis.” “Disaster Relief” and “The Flooding that Writes Itself” are passionate narratives set in the Philippines that speak to the inability of first-world organizations and the native political elite to engage in sufficient dialogue with those facing disaster to be of genuine help. In the complexly ironic couplets of “Post-Autobiography,” Tabios considers what is at stake for a postcolonial subject in a decision to represent a self or refuse/disable its presentation:

It’s an old story in the empire’s latest wardrobe: scholarship.
The Other of the double-major: accounting (convenient for tenure). (93)

The doubly iterated “certain” means “some,” and the referent is different in each case, but it also means “thoroughly convinced” of an idea. Those who are sure that they have been oppressed and that they deserve greater social franchise are deprived of their ability to rectify the situation through articulation and negotiation, and those who are sure of their current high station and “the other’s” deserved marginality can use a pretension to “scholarship” to ignore any challenge to the status quo. Note how Tabios transforms “the emperor’s new clothes” into the much more politicized “empire’s latest wardrobe.” The couplets, of course, communicate some points clearly, and so language is possible. Its “accounting” can be used for both progressive and reactionary purposes, and there is no “post-” to “autobiography,” only stories of self that reveal, conceal, or both conceal and reveal:

He titled his book Concealed In…
The ellipsis hides, elides, gives up…

From hereon, I deny the exclamation point and question mark.
We are forced to lapse to the in-terro(r)-bang. (93)

“Ellipsis” and “elision” sound very similar, but the first creates disruption through a severing and the second through a joining. (For a compelling poem in this section that thoroughly enacts ellipsis, see ”The General’s Report,” a collaging of elements from a New Yorker article about the human rights violations at Abu Ghraib.) The hyperbolic rejection of the “question mark” suggests that “ellipsis” is always a “giving up” of representation and thus ignores that concealment can be an important strategy for those who are bound to be distorted or attacked. However, it would be an error to assume that Tabios herself, author of The Secret Lives of Punctuations, Vol. 1, and not a speaker with a limited perspective is doing the denying. Further, the poem’s final sentence should not necessarily be read univocally as resignation that “we” must resort to the elision of the “interrobang,” a combination of the two proscribed forms of punctuation. The hyphenated and parenthetically-complicated last two or 2 ½ words evoke the possibility that interrogation has an inherent potential for violence (“bang”), that one can see terrorism, a violent insistence upon fundamental identity and the eradication of a fundamentally “alien” ones, as evidence that identity-without-ellipsis, with qualification, should be feared, that the big bang sundering an original mass (an ur-terra) serves as a trope for the dispersal of identity, and that a general interrogation of territory (interior/exterior) is compulsory. “Ellipsis” may be an ineluctable condition of partial selection amid a plethora of personal and cultural information that imposes a “lapse” in the desired total effect of our use of language. To “post” autobiography, perhaps ellipsis must exist within overt narration. And as Tabios’ speaker suggests in the coyly titled “No Title Required,” the first “Ekphrasis” poem, framing is no guarantor of textual or cultural isolation or “purity”:

Some paintings
Make you think
Of what lives
Beyond the frame

The lines are subtler than the simplicity of diction would suggest. There is a didactic element to much of Tabios’ work, especially with regard to her promotion of “poetry as a way of life,” but a few handsomely chosen words (“lives,” “blind/ Enough”) help the poet avoid annoying preachiness. Though a painting may feature attempts at contextually limited verisimilitude, it is not literally alive, and the poet might say that the task of ekphrasis is not to use language to reproduce pseudo-aliveness but to write through the space of the painting in order to evoke “what lives/ Beyond” it as a composition. In seeming to gesture beyond its limitations, the lauded painting “blinds” the viewer to its autotelic status as aesthetic object “enough” (not entirely!) so that the frame does not impede the viewer’s broader sensory experience (“see[ing] beyond”). Theresa Chong’s rather “abstract” painting, “Black Lightning,” also the title of Tabios’ most widely known anthology, occasions what appear to be descriptive tropes, but they are vehicles for the enactment of a nearly ritualistic encounter in a poem whose short lines mimic the svelte effect of the painter’s mark-making:

A surface
for rain
to slide against
(in the aftermath,
a wink)

The tremor
rippling a vein
in anticipation
of a possibility

Another possibility
is the tremor
rippling a vein
in anticipation (“The Shapes of Silence,” 131)

Having seen Chong’s painting both in reproduction and in person, I can attest to its stone-like surface and the “rain” “upon” it. However, in keeping with the philosophy of “No Title Required,” the poem should work independently of its object to spark an experience beyond a facile frame. “The Shapes of Silence” succeeds in the evocation of sensual contact between liquid and solid that is followed by an afterimage (“a wink”) and a sense of the inner workings of the body arising from a pun involving stone and geological processes (“vein,” “tremor,” “rippling”). In both of the quatrains above, we can surmise that the speaker asserts either that synesthetic suggestions arising from visual elements in the artwork lead the viewer to an unspecified anticipation or that the “vein-rippling” (imitating the earlier stone/rain relationship) in the work is comparable to the viewer’s spontaneous visceral reaction. However, the movement of “possibility” from end to beginning and the additional of the adjective “another” announces that the two quatrains are saying different things. It comes down to the implied distinction between “anticipation/ of a possibility” and “anticipation.” Isn’t “anticipation” always tied to “possibility,” or can one await an impossibility or a certainty? Is the poet perpetrating a meaningless redundancy or a crucial distinction? The poem goes beyond didacticism to a questioning of framing that may imply the hybrid wonder of the interrobang.

When Tabios’ poetry simultaneously enables the reader to contemplate the significance of the “frame” of words and to “see/ Beyond the frame” to “another possibility,” its algebra is most enticing and acute.