White Pearl and I: A Memoir of a Political Refugee

Talking to the Animals:
Learning English at the San Francisco Zoo

“We are made to persist. That’s how we find out who we are.” 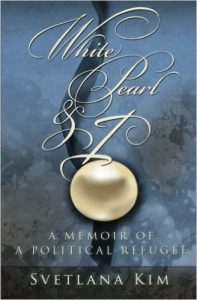 White Pearl and I by Svetlana Kim
BookSurge Publishing, Charleston, 2008

Editor’s Note: This chapter from White Pearl and I is reprinted with permission from the author. OOV is grateful to Svetlana Kim for her generosity in offering this excerpt to our readers.

I was still carrying Nina’s letter with me. I believed that one day I would meet her cousin, Galina, and, sure enough, a few months after I arrived in San Francisco, Galina and her husband came to meet me. They gave me almost $400. That meeting was thanks to a man I had asked to call Galina at her job. I could not believe that he had found her, but he told me that she would come to San Francisco from Las Vegas on her next business trip. And she did. I was very happy to meet Galina. I was also glad I hadn’t lost Nina’s letter.

“I have a letter from your cousin for you,” I said as I handed it to her.

“Thank you,” she said. She didn’t speak Russian, except for a few words that even the police officers who rescued me after I got off the Greyhound bus knew.

“Nina feels much better, not sick anymore,” I tried to say in English. Galina had invited Nina to stay in her house in Spain after having surgery in Moscow, where Nina’s only daughter lived. Nina and her husband, an army colonel, were divorced. When she finished reading the letter, Galina pulled her checkbook out of her purse and wrote me a check. It was hard to believe that this piece of paper was real dengi (money). We didn’t have checks in Russia, only cash. Everything—your gas and electric bills, your telephone and water bills—had to be paid in cash at your local office.

“I hope this helps,” she said as she handed the check to me. “This is from my husband Jim and me. I wish I could be more helpful. Don’t lose this check. It’s money for you.”

“Nina asked me in her letter to help you,” she replied. “She worries about you. She said that you come from a good family. This is on behalf of Nina.”

I accepted the check. “Thank you. But I will need your address so I can send your money back when I get a job.”

“Please don’t worry about that. Sorry, we have to go now.”

Our meeting lasted about fifteen minutes. Galina’s husband did not say a word beyond his greetings and his last words, “Good-bye.”

My days at that time were mine to go where I wanted, when I wanted, and the way I wanted. It’s hard to express what it was like to have the freedom to explore a fascinating city in which everything I saw was new. One day I took the number 47 bus to the San Francisco Zoo.

“Lions, tigers, and elephants, oh my!” I said aloud.

When I saw an animal I didn’t recognize, I wandered over to the placard to see if I could read the name. To my surprise and delight, the origin of the name was in Latin.

“Eureka!” I shouted. I can read Latin. In fact, I was able to translate part of the description of this mysterious animal. I recognized several of the words. Lion, Panthera leo in Latin and lev in Russian; giraffe, Giraffa camelopardis, sounded similar to the Russian, zhirav. Hmmm.

I went to the next animal enclosure. It was an elephant. No mistaking that. The description of its native habitat, preferred food source, and history had several words that I could now decipher. I was finally on to something. I pulled out my ever-present notebook and started copying down the names of the animals I knew. That’s a zebra. There’s a giraffe. Those are in English. I wrote down other words of animals that weren’t familiar and took the list home with me that night.

Webster’s Dictionary became my new best friend. By looking up the English words I had written in my notebook, comparing them to the Latin roots, and studying the accompanying pictures in the dictionary, I laboriously continued teaching myself to read, write, and speak English. This was in addition to what I was learning in my ESL classes. It was slow going and mentally taxing. Sometimes I gave myself headaches trying to figure it all out, but I made progress.

I bought books at the Salvation Army store for twenty-five cents and read aloud as much as I could, not even understanding what I was reading. It was important that my eyes got comfortable with foreign letters. I set a schedule and disciplined myself to study every day. For the first time ever in my entire life, I had no school, no job, no permanent place of my own, no friends, and no money.

I had found a coffeehouse down the street at the corner of Fillmore and Jackson that attracted an international set. It became my favorite hangout. At first, I just eavesdropped on conversations and noted, with growing delight, that I could understand snippets of conversations. Thanks to my zoological Rosetta Stone, I was learning English.

Then I noticed a table of young people, laughing and talking in a variety of languages. I had found my peers. What fun it was to meet energetic exchange students from around the world and make friends with people my own age! Our ragtag group came from Italy, Sweden, Guatemala, Switzerland, Germany, and Russia. Aha! They’re all like me, I noticed, speaking English with an accent. We were so grateful to have found each other—we were all “strangers in a strange land.” We became a community unto ourselves.

I remembered that back home in Russia, my eighth grade teacher used to call my father at the hospital where he worked to say, “Your daughter is really good with languages. And she is only fifteen years old. You should encourage her to study German. She could work as an interpreter.”

That probably would have been a great idea if I had gone to Germany, but few people I met in San Francisco spoke German. Speaking Spanish would have been more helpful. I was grateful for the teacher in Russia who had encouraged me to study a foreign language. When someone asked me a question, I would automatically answer in German. That’s how I met Karl from Germany, who owned an upscale hair salon.

I spent my days with my melting-pot group of friends at Spinelli’s coffee shop on Fillmore and Jackson Street, studying English at the zoo, and discovering how wonderful San Francisco is. The nights, however, were awful when I had too much time on my hands.

Inevitably, my thoughts turned to Russia and the family I had left behind. My school. My friends. Was my decision to leave so hastily wise? Rash? Was my time here supposed to be a temporary adventure? Was I meant to stay? I lay in bed at night, going back and forth, asking myself, Should I stay? Should I go home? I often woke up with a wet pillow, evidence of my tears of homesickness.

My open-date return ticket would expire three months later. The night before it expired, I didn’t sleep all night, thinking. The flight leaves at 9 a.m. This is my last chance to go home. Making decisions is always difficult, but making a decision that will affect your life once and forever is nearly impossible. Just when I was seriously considering returning home, serendipity (or what I now call serendestiny) showed up again in my life.

On the morning when my Aeroflot ticket expired, I went to look for a job. I took a bus on California Street and ended up in a nice neighborhood, where I saw a woman pushing a stroller. She looked worried. I decided to follow her. A block later, she entered a building and posted a note on the board: Nanny wanted. I could read her note. Perfect! “Nanny” sounded similar to nannya in Russian. I understood that she needed help. But when I turned around, she was already gone. I ran outside and approached her.

“Hello, hello, hello!” I tried very hard to speak good English. “I am looking for a job I can work for you.” I got the job! The woman, whose name was Marian, worked in the film industry, and her husband was a freelance photographer for Time and other well-known magazines. They told me that their son was an easy child. “He sleeps well, eats well, and loves to play,” they said. They showed me around the house and offered me hundreds of CDs to listen to and magazines to read if I were bored.

Svetlana Kim arrived in the U.S. with a dollar in her pocket and wondered how she would survive San Francisco when she barely knew a word of English. Today she is a radio persona with a show of her own interviewing authors, artists and various individuals who inspire with their career and their lives. In 2009, she was Macy’s spokesperson for Asian Pacific American Month.